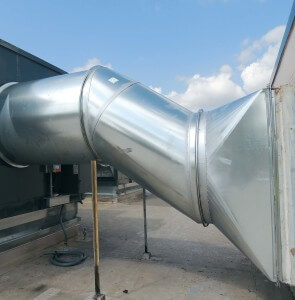 The convention center used 12 chilled water air handling units to cool more than 320,000 square feet of exhibition, ballroom and meeting space. After 22+ years, the outdated systems were overmatched during peak periods. McKenney’s was selected to replace them during downtime in the summer. Sweltering temperatures, tight deadlines and precise scheduling turned up the heat on the project.

McKenney’s Service, along with its Automation and Control Solutions teams and the project engineers, custom-built roof top units (RTUs) to meet customer specifications. All piping was prefabricated in McKenney’s offsite pipe shop to simplify work on-site and meet quick turnaround requirements. The project culminated in an early morning weekend helicopter lift to put the new RTUs in place.

The team completed the project on time, on budget and within a 12-week deadline. McKenney’s is now the single-source service provider for the Cobb Galleria Centre’s controls and HVAC systems.