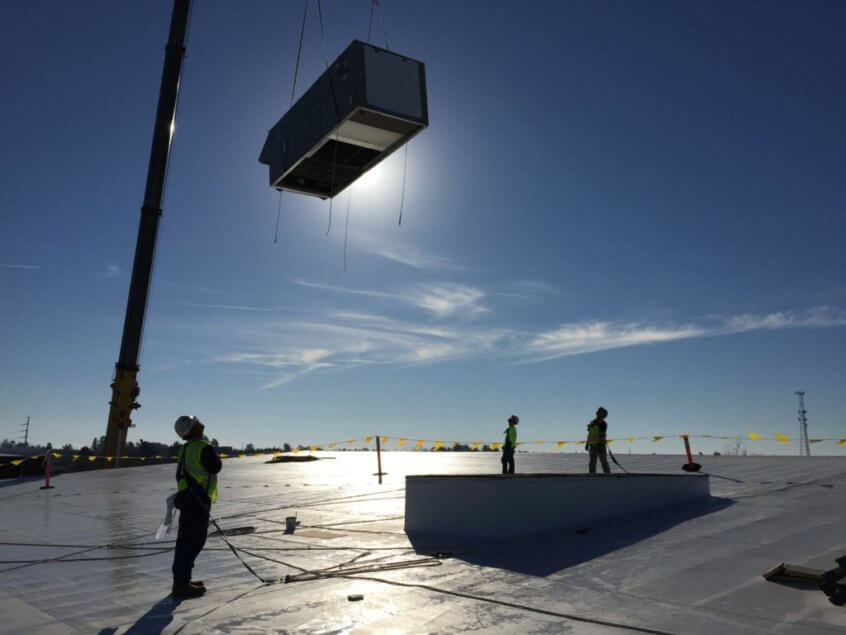 By leveraging pre-planning, fabrication, and design-build processes, McKenney’s Building Performance team delivered a turnkey solution to a manufacturing facility where the production floor could reach +110°F with minimal impact on customer’s operations. McKenney’s experienced team of craftsmen installed the 300-ton cooling system in a single day.

This plant produces large, high voltage transformers for energy grid applications. The production floor of this plant is roughly 50,000 SF and contains +15 large ovens for baking the finishes for transformers. These ovens operate continuously for 2-3 weeks at a time and impose a significant heat load on the space. The facility was previously unconditioned, and temperatures could reach 110 °F and above inside the facility. A majority of the plant operates on multiple shifts from 5 am to 6 pm with some production units working until 11 pm. In addition to operations constraints, the plant has been optimized for their production process, so nearly every square foot of the plant and surrounding area is accounted for and utilized for production, lay-down, or shipments.

McKenney’s was tasked with developing a design-build solution to provide cooling to the production floor while minimizing the impact on the plant’s operations.

McKenney’s provided the design, installation, and controls for 6 new packaged rooftop units. The placement of the units on the roof allowed the plant to continue operating without having to reposition any of its equipment or modify any of its processes. As the prime contractor, McKenney’s also managed the design and installation of the structural steel, electrical, and fire protection systems.  Due to the size and weight of the units, the existing structural steel required reinforcement and installation of new columns. To accommodate the near-constant production schedule of the plant, McKenney’s project team positioned the rooftop equipment over the wide walkways in the plant. By avoiding placing equipment over the workstations in the plant, the plant workers would be able to continue work during low-impact portions of the project (air distribution, insulation, controls, test and balance, etc.).

In an effort to integrate the project into the plant’s operations, our superintendent on the project attended the plants daily production meetings and was in constant communication with the facility manager, safety supervisors, and area leaders. In addition to an increased level of communication, the project team utilized McKenney’s Sheet Metal Shop’s fabrication and pre-assembly capabilities to produce fully assembled supply and return drops for the rooftop units. The project superintendent built a team of experienced McKenney’s craftsmen which was able to set all of the pre-fabricated duct assemblies and all six rooftop units in a day.

McKenney’s successfully provided the turnkey installation of the 300 ton cooling system in a single weekend shutdown with no other interruptions to the plant’s production schedule. Our in-house startup & commissioning technicians and controls programmers teamed with manufacturer’s startup personnel to provide a seamless turnover to the facility.

Here are some snapshots from the project: Logan Easterwood is a part of the Building Performance Solutions team at McKenney’s, which specializes in implementation of turnkey design-build and energy driven "paid for out of savings" projects in the industrial, federal, state and local marketplace. Logan, a graduate of Georgia Tech and former McKenney’s co-op, is responsible for planning and coordinating all aspects of the construction process including working with engineers, architects and vendors as well as managing the project schedule, quality, and project costs.