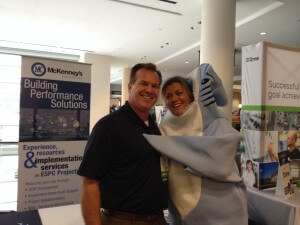 I recently joined Jeremy Greenwell (McKenney’s Business Development) and over 250 energy and utility experts for Moving Forward: 2015 SEEA & AESP Southeast Conference on October 28-30. As a member of SEEA, this is the first time we have participated in the conference, and we were happy to be a Silver Sponsor! There were several interesting keynote speakers including the CEO of Southern company Tom Fanning who spoke about the impact the energy industry has on the future of the typical US Consumer.

How does Atlanta stack up against other cities around the country?

Atlanta is one of ten major cities involved with the City Energy Project, a national initiative to improve energy efficiency of buildings. The goal of the project in these ten cities is to cut energy waste in buildings and make American cities healthier and more prosperous. In addition, Stephanie Benfield, Director of Sustainability for the City of Atlanta, reported that the Atlanta Better Buildings Challenge ranked first in the nation in total square footage involved. Stephanie also announced that awards for the City of Atlanta ESPC program would be announced publicly soon. This is exciting news, as the McKenney’s Building Performance Solutions team participated in this RFP and are looking forward to involvement in this project.

Georgia is participating in the DOE Energy Code Field Study

Georgia is one of a few southeastern states participating in the DOE Field Study to determine Energy Code compliance and revisions. Currently, the work in Georgia is focused on data collection with a goal of collecting information from at least 200 homes. This data will be used to evaluate the current status of energy compliance in Georgia residential construction. Data collection will help to highlight any shortcomings in the current codes and will be the basis for code revisions in the future. Outreach and training programs were also discussed in recognition that codes alone are not enough to affect the required change in construction techniques. One of the speakers at Moving Forward: 2015 SEEA & AESP Southeast Conference. As Profit Center Manager, Tony is responsible for business development, sales and execution of turnkey design build projects in the SE USA. Acting as a prime subcontractor to ESCOs, Utilities, and A&E firms, Tony's focus is on implementation of energy driven "paid for out of savings" projects in the industrial, federal, state and local marketplace. His team also supports many general contractor customers on design build and design assist procurements in this market.